The Field Training Officer for the Mount Pleasant Police Department was named the Child Passenger Safety Technician of the Year by Children’s Trust and Safe Kids South Carolina for his prevention work in installing and checking car seats as well as recruiting other volunteers in his department to join him in keeping the state’s roads safer for children.

“It’s pretty cool. I had no idea that my sergeant had nominated me until last week,” Calabrese said. “They didn’t tell me. It’s nice to be recognized for all the stuff that we’re doing, but we also have 10 other people helping do all of it. I couldn’t check all the seats by myself.”

Calabrese accepted the award from Children’s Trust CEO Sue Williams at the conclusion of the three-day event hosted by the S.C. Department of Transportation in late July. Children’s Trust, home to Safe Kids South Carolina, works in coordination with the S.C. Department of Health and Environmental Control to provide training and continuing education for child passenger safety technicians. 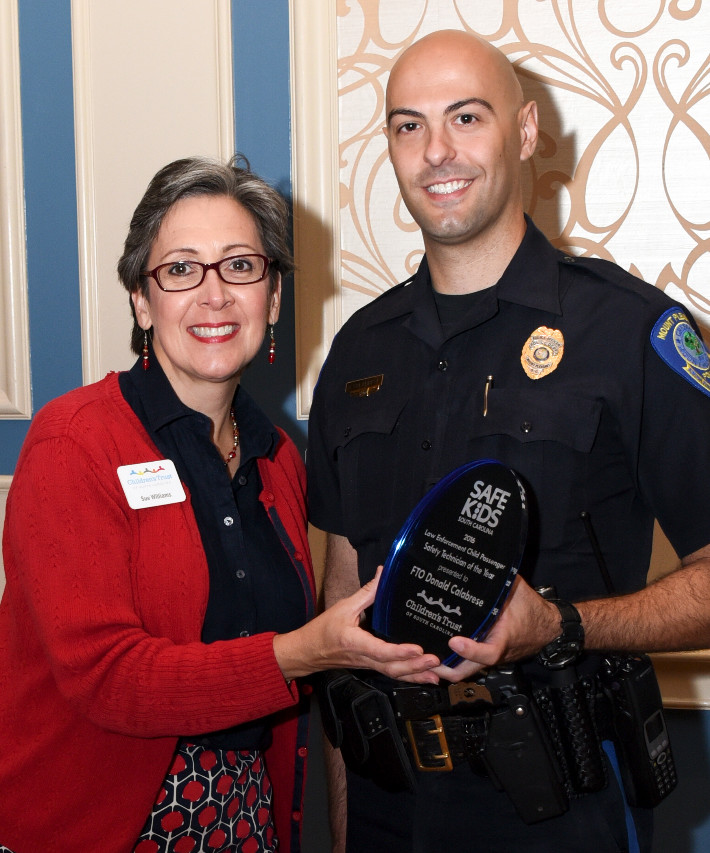 Sue Williams awards Donald Calabrese with the Child Passenger Safety Technician of the Year award at the Highway Safety Conference.

A member of the Mount Pleasant Police Department for nine years, Calabrese became a technician three years ago because he saw a need for parents in the community to have a place to get car seats properly installed. According to the National Highway Traffic Safety Administration, 85 percent of people in South Carolina install car seats incorrectly.

“Field Training Officer Donald Calabrese represents the best of what community prevention has to offer,” Williams said. “He is involved in Safe Kids Trident, he participates in community car seat check events, and he conducts child passenger safety workshops for community members. He has been a certified training technician for three years and has organized multiple car seat check events. He has recruited more child passenger safety technicians to ensure that his department has an adequate number of officers who are certified.”

Child passenger safety technicians, many of them first responders like firefighters, law enforcement and EMTs, learn how to install a wide variety of car and booster seats for the many different ages and sizes of children. The training is an intensive three-day course and requires six hours of continuing education credits per year.

“Technicians are volunteers. They are not paid for this work,” Williams said. “They take time out of their busy schedule because they know it is a valuable community service to help families and parents make sure their car seats are installed correctly.”

His efforts did not go unnoticed by his supervisors. Mount Pleasant Police Department Sgt. Robert Whitlock summed up Calabrese’s dedication this way in nominating him for the honor: “He loves this part of his job and has been the driving force to bring back the program in Mount Pleasant. He saw the need for this community service that our agency was lacking.”

At a recent car seat check in Mount Pleasant, Calabrese stated that 60 families came through over a two-hour period to get a seat installed or checked. He believes awareness around the issue is growing, and much of that is related to the statewide push by Safe Kids South Carolina and DHEC to get the word out.

When properly installed, child safety seats can reduce the risk of death by 71 percent for infants and 54 percent for toddlers. In South Carolina there are more than a half million children who are younger than 8 years old. Even with an all-time high in this state of 1,000 trained techs, Williams noted many more are needed. In addition, there are currently 19 counties in South Carolina with no inspection station.

Calabrese stands as a shining example of the important role they serve.