Child Abuse Prevention Month received a big kickoff April 4, when Children’s Trust of South Carolina and the S.C. Department of Social Services hosted a press conference at the Governor’s Mansion. Gov. Henry McMaster read his official proclamation that stated the seriousness of child abuse as a public health issue and promoted the importance of statewide and community prevention programs as the most effective way to reduce child abuse and neglect. Neil White, who tells the stories of Children’s Trust, covered the event. 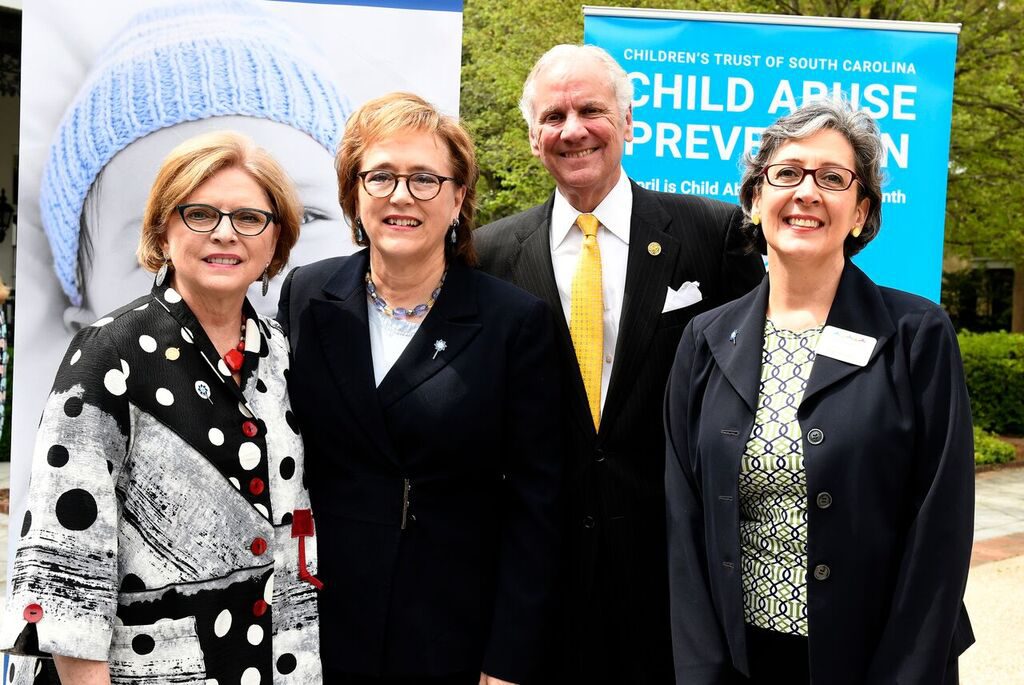 On a beautiful April afternoon, child advocates stood together at the Governor’s Mansion to show their support for happy, healthy children and strong families at the start of Child Abuse Prevention Month.

Children’s Trust and the S.C. Department of Social Services teamed up with Gov. Henry McMaster to raise awareness about the importance of preventing child abuse and neglect.

Williams pointed to the 17,662 children in founded investigations of child maltreatment in South Carolina in fiscal year 2017, enough to fill 236 school buses. The cost goes far beyond the heartbreak of damaged lives and broken families. Approximately $1 billion in direct and indirect expenses per year in the state are associated with the intervention and treatment of child abuse and neglect.

That is why Children’s Trust works on the prevention side of the equation through implementation of proven programs – home visiting, strengthening families, positive parenting – with local partners across the state that offer solutions for reducing risks while educating parents and caregivers. 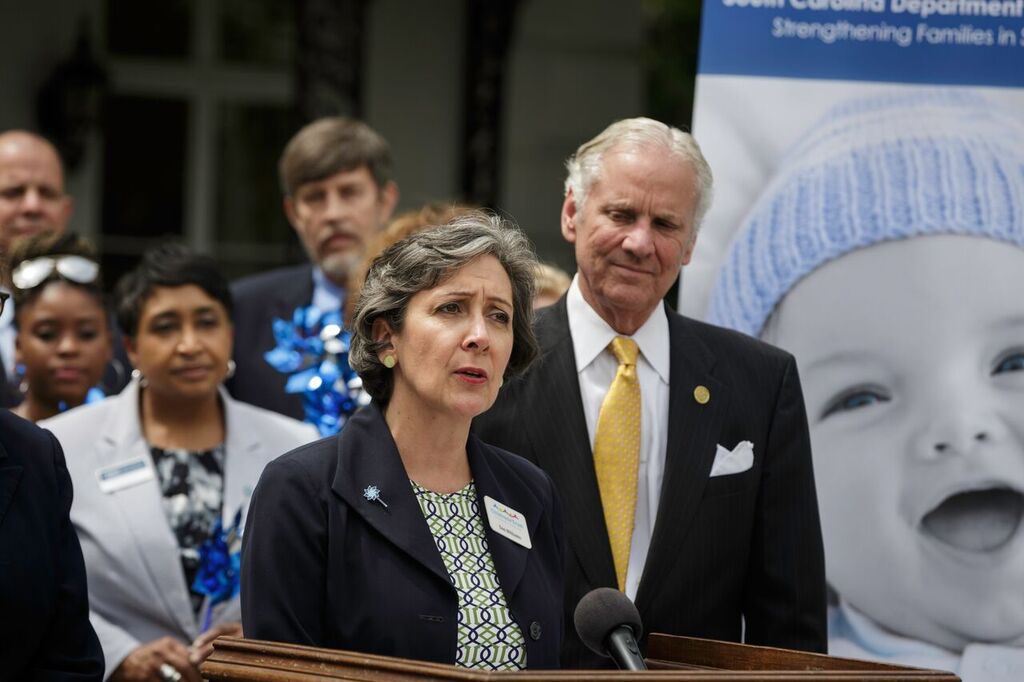 “We believe prevention is the best investment and guides the work we do at Children’s Trust,” Williams said, “because we all know that working upstream is the most cost-effective and efficient way to address abuse – before the crisis situations occur.”

Children’s Trust, the state affiliate for Prevent Child Abuse America, focuses on two-generation strategies by working in coordination with local child-serving organizations to break entrenched cycles of abuse and neglect and bring about lasting change.

Williams announced during the press conference that Children’s Trust, through funding partnerships with federal and state agencies as well as private endowments, is making an investment of more than $9 million in prevention programs this year across the state.

Alford, whose agency deals with the difficult task of helping children and families devastated by abuse and neglect, believes the prevention of child abuse – and the opportunity for kids to grow up in loving, caring homes – is something everyone can support.

“Our children need to be safe and protected. That’s not complicated or controversial. It’s something we as a society can all agree on,” Alford said. “When someone abuses a child, it affects all of us.”

There are many root causes of abuse, including poverty, lack of education, unemployment, domestic violence, substance abuse, social isolation, mental illness and homelessness. Adverse childhood experiences can lead to poor health and social outcomes into adulthood, which is why addressing childhood trauma through prevention is so crucial.

Sen. Katrina Shealy, R-Lexington, a leading advocate on children’s issues in the S.C. Legislature, attended the press conference to lend her support to all those working on prevention efforts.

“There’s nothing more important than South Carolina’s children. To see so many children who are abused and neglected, those numbers are heartbreaking. We’d like to save every child from that experience,” Shealy said. “I’ve dedicated my entire Senate career to making sure children and families are protected in South Carolina. Children’s Trust is doing a great job, and we’re going to keep doing everything we can to do what’s right for children.” 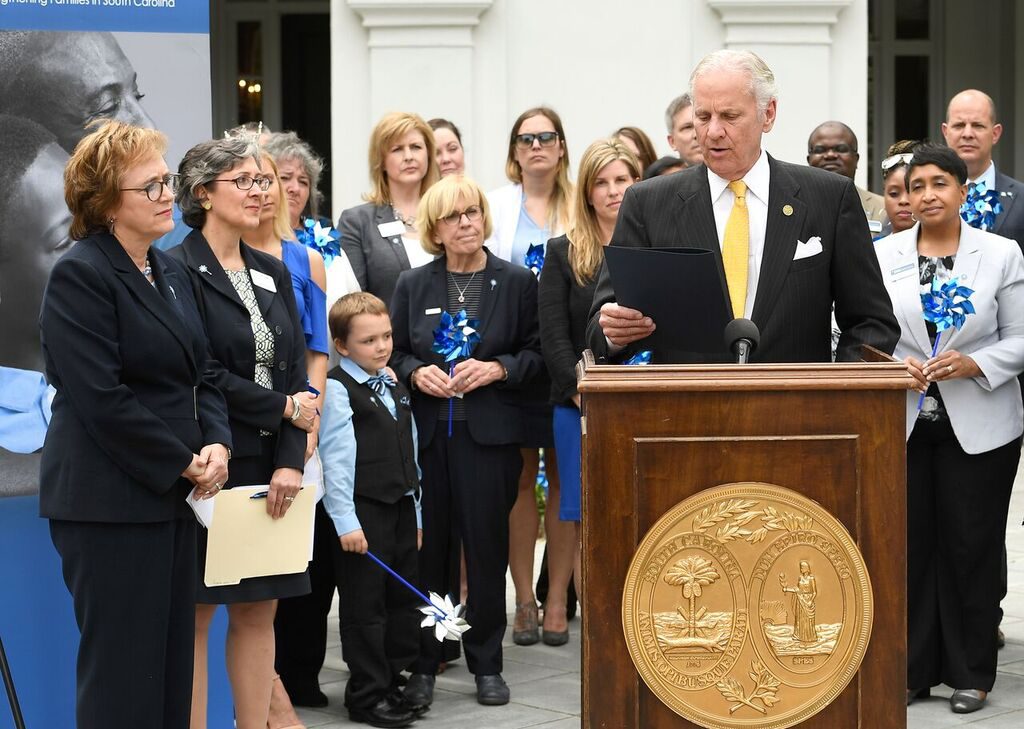 Getting policymakers like McMaster and Shealy involved is an important step in finding solutions. But Alford talked about the significance of regular people doing their parts as well by opening their hearts, whether that means helping a family that’s struggling, asking a church to support a kin caregiver wanting to take in an abused child, or becoming a foster parent.

Many in the assembled crowd at the event, which included staff and board members from Children’s Trust and DSS, held pinwheels, the national symbol for happy, healthy childhoods. The mansion grounds also were colorfully decorated with pinwheels, with a few of them chewed up by the governor’s ever-present bulldog, Mac.

McMaster’s proclamation (PDF) encouraged all South Carolinians to dedicate themselves to protecting the quality of life for every child. Williams is convinced that Child Abuse Prevention Month can bring everyone together to do just that.

“We all agree that all children should have the opportunity to grow up healthy, nurtured, safe and strong,” Williams said. “We know that proven prevention programs, when implemented effectively, have the power to transform families and successfully make good on our investment. We thank all of those working to make South Carolina strong, now and into the future.”