The event, held at the Dennis Building on the State House grounds, focused on the need for legislators, agencies, organizations, communities and individuals to take action against child abuse and neglect through prevention, treatment and prosecution.

Lee Porter, chief program officer for Children’s Trust, spoke to the need to focus upstream on programs and collaborative approaches that strengthen families and communities, such as home visiting and evidence-based parenting education like the Strengthening Families Program and the Positive Parenting Program. 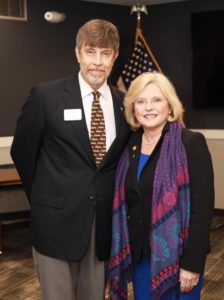 Lee Porter of Children’s Trust and Sen. Katrina Shealy discuss the importance of child abuse prevention before the start of the event.

He cited the 20,198 children in founded investigations of child maltreatment last year, which would fill 36 elementary schools in South Carolina.

“The effort to ensure the safety of all of our children must be an all-hands-on-deck approach,” Porter said. “The role of Children’s Trust in this collaboration is to bring attention to the value of primary prevention. We know that evidence-based strategies and programs that start at birth and even earlier, can prevent, or counter, adverse childhood experiences and promote safe, stable, nurturing relationships and environments. By helping parents to parent better, we can stop abuse before it happens.”

Wilson pointed to the work of the 17 Children’s Advocacy Centers across South Carolina, where 9,558 child victims and their families were provided advocacy and support services last year.

“It’s a network of heroes,” said Wilson, who had directors of the local CACs standing behind him as he spoke.

Many in the audience held pinwheels, the national symbol for happy, healthy childhoods. Children’s Trust, the state affiliate of Prevent Child Abuse America, distributed 35,000 pinwheels across the state for April activities held by prevention partners and community organizations.