The Strengthening Families Program (SFP) wrapped up its fall cycle with graduation ceremonies around the state. We take a look at a Growing Home Southeast site in Richland County, where a group of families developed positive discipline practices, learned how to stay resilient in tough times, and improved their parent-child communications skills. Neil White, who tells the stories of Children’s Trust, spoke to program participants about the impact on their lives. 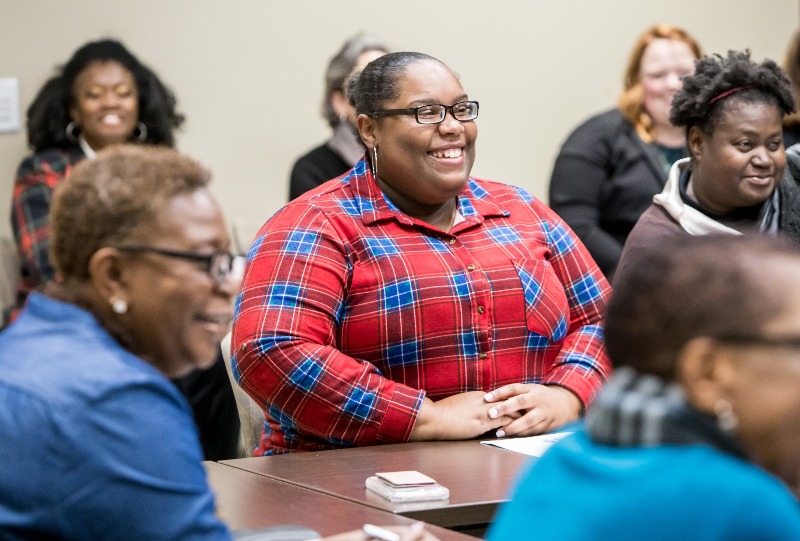 Kiara Grissom happily listens to the discussion in the parenting session of SFP.

Kiara Grissom knew she needed some help in her life. The stresses of parenting left her feeling overwhelmed and dispirited at times, and she was eager to rediscover some positivity.

A visit to her doctor’s office led to a recommendation that she look into the Strengthening Families Program (SFP) as a resource that could provide additional support for her and her daughters, Symone, 9 and Elizabeth, 5.

Grissom decided to enroll in the program being delivered by Growing Home Southeast at Hand Middle School in Columbia, one of 32 SFP sites across the state funded by Children’s Trust. In mid-December, her family graduated from the program with six other families in a ceremony held at United Way of the Midlands.

During the awarding of the graduation certificates, she movingly spoke of SFP’s benefits, which included improved communications with her daughters, the friendships she has made with other parents in the program, the nonjudgmental parenting sessions with the group facilitators, and the personal strength she has discovered as she learned that she wasn’t alone in this journey. 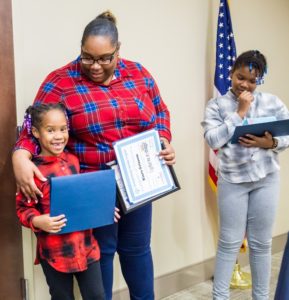 The Grissom family is awarded their certificates for completing the program.

Most importantly, Grissom was able to apply the weekly lessons she learned almost immediately to her family’s home life, something her children affirmed with vigorous nods of their heads. At one point, Grissom believed yelling and screaming were the only ways to get her daughters to listen. She admitted that was the wrong approach.

“We talk a lot more. They don’t even like it when I scream now. They come to me and say ‘Mommy, you do not have to yell.’ It’s just very helpful. And it keeps us with open communication,” Grissom said.

“They’re capable of doing things on their own, and they don’t need me hovering over them. They have to learn right from wrong and use what I’ve instilled in them. I let them fall a little bit and get up on their own, but I’m always there to help them if they need it. That’s the biggest thing.”

Bonding Over a Family Meal

The evidence-based program features two-hour weekly sessions that begin with a family meal before splitting into parenting classes and child classes. They come together again as a full group to practice new skills at the end of each evening. Growing Home Southeast SFP site coordinator Tami Mistretta credits the family meal as the start of the bonding process where family members can make meaningful connections with each other through conversations that don’t include technology interruptions. 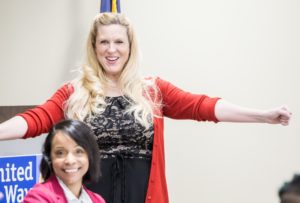 The parent meetings explain through interactive lessons and discussions the best ways to interact positively with children, which includes showing enthusiasm, praising good behavior, and providing consistent discipline that leads to reasonable consequences. The children’s training includes communication skills to improve relationships with parents, peers, and teachers, as well as dealing with criticism and anger through coping skills.

Mistretta, who began as a facilitator with the program in 2014 before becoming a site coordinator in the past year, has closely observed how the SFP curriculum has served as a bridge to stronger relationships for families.

“I’ve seen time and time again that families have responded. The children would not only say their families were strengthened, but they would go to school and use these skills. So schools were improved by this, communities were improved,” Mistretta said. “I have seen firsthand how the families at first were shy and quiet. Then they participate and use these skills with their own family. Parents would come back and tell us the positives, ‘Now my children are fighting less. Now we are speaking more. Now I am getting them to do chores.’” 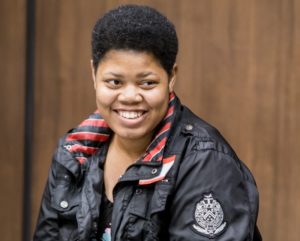 Shaneria Govan entered the program with her children Nakuria, 7 and Nick, 4, on the recommendation of a cousin. She quickly discovered how positive and friendly the site’s staff were as her family embraced the lessons.

“We applied everything that we learned each week. I’ve received some great, positive feedback from my kids. They were very cooperative. The chore chart, for us, it worked. I’m grateful for that because, at first, they would not do chores at all,” Govan said. “The communication was definitely better. Nakuria’s always been a great kid. I never had any behavior issues with her, but just her expressing herself was a big issue. She’s definitely improved in that area.”

Children’s Trust provides training for partners, collects data, and monitors the program to ensure it reaches the maximum potential for children and families as part of its overall mission to prevent child abuse and neglect in South Carolina. The Duke Endowment and the S.C. Department of Social Services serve as the funding partners in this effort. 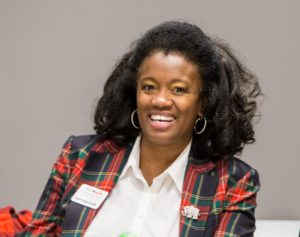 Karen Dukes-Smith, Children’s Trust SFP coordinator, works with this Growing Home Southeast site to ensure program fidelity. She was impressed with how a number of early challenges with some of the families were overcome.

“I could see some of the families that had the biggest challenges are the most successful ones. So I attribute that to the program and to the leadership and support of the staff to make it work,” Dukes-Smith said. “It starts with the team that’s funded to do the work. They are equipped, they’ve been trained, they have the passion, and they have a desire to make this program successful. And they’ve done a great job of that.”

Brennon Graham, president and CEO of Growing Home Southeast, an organization committed to providing quality, strength-based services to families, youth and children, enjoys attending the graduation ceremonies to watch the staff and families celebrate their accomplishments.

“That’s the number one thing I love to see. I love to come out and hear the stories,” Graham said. “There was a story that I heard where a grandparent said, ‘I raised my children, but if I had something like this, maybe they would have been a little different.’ That’s just really powerful, when you know that it works and when the children even say, ‘I’m happier at home, my parents are doing this differently.’ They feel the effect of it.”