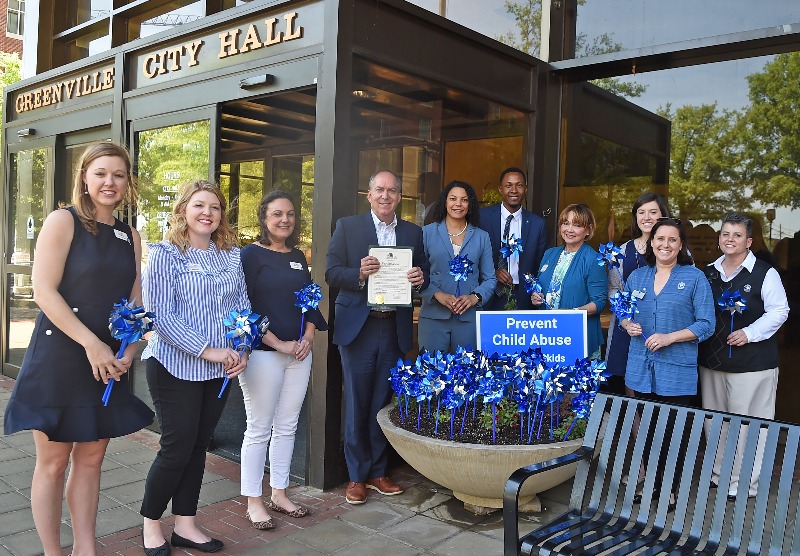 Knox White, the longtime mayor of Greenville, understands the importance of shining a spotlight on a difficult issue in order to bring attention to finding a solution.

His declaration of April as Child Abuse Prevention Month in the city of Greenville serves as an example. In front of City Hall on Main Street this month, White stood with board and staff members of Children’s Trust of South Carolina and Greenville First Steps as he issued the official proclamation. 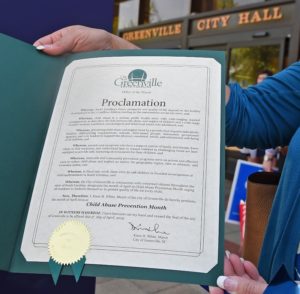 “It’s important for people to know they can respond to the epidemic of child abuse by being involved in programs in their community,” White said. “We’re ready to highlight this serious problem. A lot of it is about heightened awareness of child abuse. I can certainly remember the time when people didn’t talk about it. It’s healthy that it’s being highlighted because everybody can play a role.”

Children’s Trust takes a leadership role in South Carolina to prevent child abuse and neglect through evidence-based programs like home visiting, the Strengthening Families Program and Triple P (Positive Parenting Program) by working with local implementing partners in nearly every county. Greenville First Steps is one such partner, as the organizations are working together to launch Triple P in Greenville County.

With 20,198 children in confirmed cases of child maltreatment last year, Children’s Trust, the state affiliate for Prevent Child Abuse America, and partnering child-serving organizations are teaming up to connect families to programs and resources that build happy, healthy childhoods. 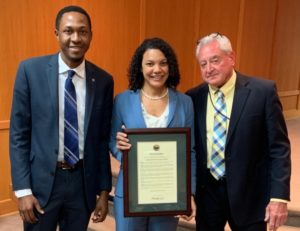 As a part of these efforts, Children’s Trust also is engaging community organizations, civic leaders, government agencies, businesses, schools, and faith-based groups to pull together during Child Abuse Prevention Month to promote the physical, emotional, social and educational well-being of all children in the state.

Children’s Trust board member Tiffany Santagati, who works with Southern First Bank in Greenville, welcomed the Child Abuse Prevention Month proclamation from the city, which followed one from Greenville County the previous week. She attended both events as part of building a bridge between Children’s Trust and local governments.

“It’s extremely important that the county and the city get behind it because obviously awareness is key. Our goal is to do prevention before anything happens,” Santagati said. “Without the awareness of our county officials and our city officials, we are already behind the eight ball. I’m really excited they’re getting on board this year.” 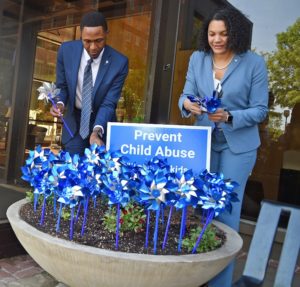 As she surveyed the large planter filled with pinwheels – the national symbol for great childhoods – in front of City Hall, Santagati beamed.

“I love it,” she said. “Really, the pinwheel symbolizes hope to me. To see people rallying around the idea of prevention, it just brings hope and a smile to my face.”

Children’s Trust board member Edward Anderson, a principal at Tanglewood Middle School in Greenville, also appreciates his city and county stepping up to recognize the significance of raising awareness around child abuse prevention.

“As educators, we can’t always control what happens at home, and we try to do as much as we can to create a positive environment for kids in their schools,” Anderson said. “When you see the city partner with an organization like Children’s Trust, you understand they’re there for them by making sure there are some factors that we can control at home and in their community that really make a difference. There are so many programs that Children’s Trust supports that do just that, and in turn, it makes kids more school-ready, more learner-ready and ready to move on to greater success later. I’m just so grateful for this partnership. It’s strong.”

With organizations and local governments in the Upstate standing together during Child Abuse Prevention Month, they’re showing a commitment to strategies that can break generational cycles of abuse and neglect and bring about lasting change. 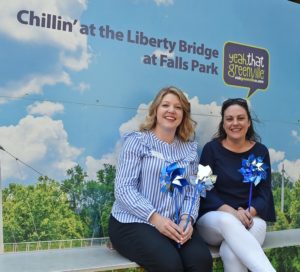 Greenville First Steps believes parents play an essential role in ensuring a child starts school feeling healthy and ready to learn, and their organization works to provide accessibility to resources through community agencies that promote readiness. Greenville First Steps board chair Lauren Briles, who owns a pair of local preschools, is convinced prevention efforts hold the key to unlocking a child’s success.

“It is very important to me that every child is protected and that we, as a community, take care of all the children so that they can all be healthy and safe and happy,” Briles said. “If children are abused early in life, they have to carry that throughout their life and live with that. It’s hard to overcome. We want to protect all those little babies and help them as they grow.”

Thanks to a grant from The Duke Endowment, an innovative partnership between Children’s Trust and Greenville First Steps is building a countywide, coordinated system of parenting support to meet the needs of families in Greenville County.