Children’s Trust received a check for $77,646 from the Beta Zeta chapter of Kappa Delta sorority at the University of South Carolina after a successful fall fundraising letter-writing campaign. The ongoing commitment to the prevention of child abuse and neglect by Kappa Delta made for a celebratory evening for both organizations. Neil White, who tells the stories of Children’s Trust, covered the Nov. 28 event, which occurred on the eve of Giving Tuesday.

As the newly-elected president of Kappa Delta sorority stood at the front of a packed Belk Auditorium in the Close-Hipp Building on the USC campus, she smiled as she held an oversized check so the amount couldn’t be seen by the assembled crowd. Kappa Delta members had gathered at the November ceremony to learn how much money they had raised in a fall letter-writing fundraising campaign for Children’s Trust of South Carolina and Prevent Child Abuse (PCA) America.

Massey’s unveiling of the final figure ­– $97,057 – drew loud cheers and applause from her sisters before she presented the check for $77,646 to officials of Children’s Trust, which serves as the PCA chapter for South Carolina and the statewide organization dedicated to the prevention of child abuse, neglect and injury. The remaining 20 percent will go to PCA America. 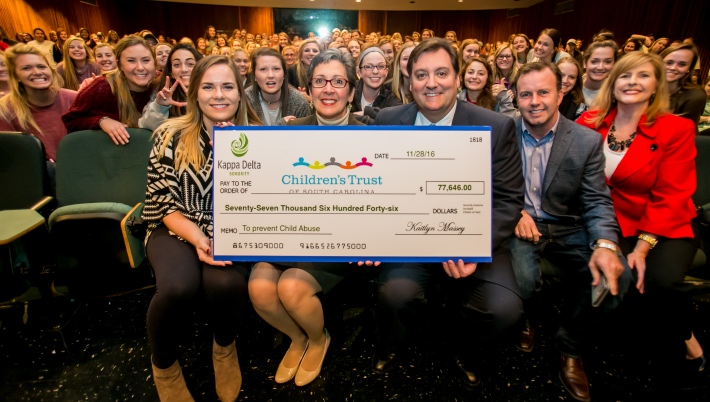 Massey, a junior from Charlotte, stated she knew the campaign was going to be a huge success when the response cards started pouring in daily with amounts ranging from $10 to $1,000. The sorority’s 406 members each sent a minimum of 25 letters soliciting donations, with over 12,000 total letters sent out.

She noted the members were excited about the top fundraiser being rewarded with an iPhone 7 donated by Children’s Trust supporter Geoffrey Hardee. For raising an individual high of $1,400, Francesca Abplanalp will receive the phone. 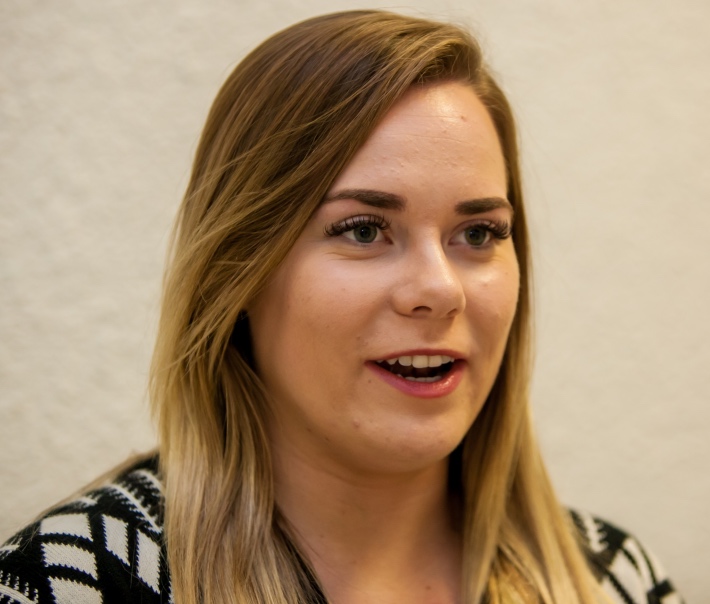 As the sorority’s vice president of community service before moving into the president’s position, Massey admits she cried when the first wave of donations start rolling in. She quickly realized the initial goal of raising $37,000 would be shattered.

Many of the responses included notes of support from donors saluting the group’s mission of child abuse prevention.

“It was amazing to not only see the monetary support but also the emotional support from everybody,” she said.

Massey first pitched the idea this fall to Adrienne Bellinger, the chief development officer for Children’s Trust, after hearing of the letter-writing concept from a friend in another sorority. The organizations wrote and printed a co-branded letter that Kappa Delta members sent to family and friends asking for a monetary donation.

It didn’t take long for the campaign to provide a big payoff. Children’s Trust CEO Sue Williams accepted the check along with Bellinger, David Yezbak, the board of directors’ presiding chair, and Stephen Leicht, the board’s vice chair.

Williams didn’t know what to expect from the fundraiser, but she acknowledged with a big smile that the amount raised surpassed all expectations.

“It says a lot about them and their commitment, and we are encouraged by their energy. We are in this work every day, and they bring new life to what we do. It’s important for us as an agency,” Williams said. “This was their idea, and they ran with it. We followed along with it. It was their leadership, and we just supported them. We’re very fortunate to be affiliated with them.” 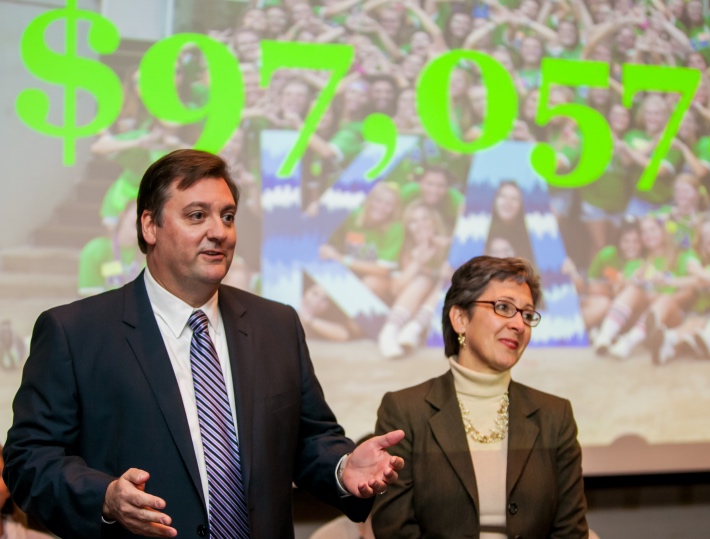 David Yezbak and Sue Williams thank the Kappa Delta members for their commitment and hard work to prevent child abuse and neglect.

Since 1984, Kappa Delta collegiate and alumnae chapters across the country have held events in the fall and the spring to support the prevention of child abuse. The USC chapter began its partnership with Children’s Trust in 2008, and over that time period, it has raised nearly $300,000 for the statewide child abuse prevention organization.

The check ceremony came one day before Giving Tuesday, the annual global day of charitable celebration that encourages individual and corporate philanthropy. Yezbak saluted Kappa Delta for its commitment to preventing child abuse and getting the year-end giving season for Children’s Trust started in such a big way.

“We’re really lucky to have such a partnership with the KDs that we’ve had over the years,” he said. “They’ve continued to raise money as an integral part of our fundraising as well as being excellent ambassadors for our organization.”