After a successful fall fundraising letter-writing campaign by the Beta Zeta chapter of Kappa Delta sorority at the University of South Carolina, Children’s Trust leaders were all smiles at a check ceremony. The ongoing commitment to the prevention of child abuse and neglect by Kappa Delta made for a celebratory March evening for both organizations. Neil White, who tells the stories of Children’s Trust, covered the event. 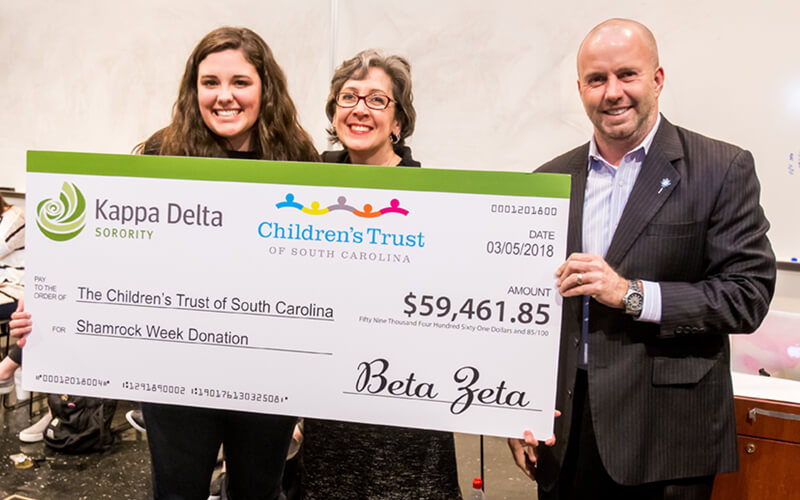 The common goals shared by Children’s Trust and Kappa Delta sorority at the University of South Carolina have served as the foundation for a strong partnership over the last 10 years.

The two stood together once again during a March ceremony at the Belk Auditorium in the Close-Hipp Building on the USC campus, where Kappa Delta chapter president Caroline Ambrose presented an oversized check for $59,461.85 to Children’s Trust CEO Sue Williams, board chair Stephen Leicht and chief development officer Adrienne Bellinger.

That amount reflected the efforts of the 400 sorority members in a fall letter-writing campaign to benefit Children’s Trust of South Carolina and Prevent Child Abuse (PCA) America. The announcement of the final figure generated smiles and cheers throughout the auditorium.

Ambrose believes Kappa Delta’s fundraising and awareness work has succeeded because chapter members find great purpose in being a part of something bigger than themselves, such as the need for child abuse prevention efforts in the state. Williams saluted the KD members for their dedication to making the lives of children and families better through these initiatives.

“We, at Children’s Trust, appreciate the passion and commitment these outstanding young women demonstrate annually by supporting our work to prevent child abuse and neglect across South Carolina,” Williams said. “The Kappa Delta fundraising efforts showcase exemplary philanthropic leadership, and we are always inspired by the energy they bring to this special partnership.” 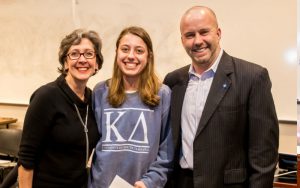 KD member Carly Fassler, a sophomore from Charlotte, was rewarded for raising the largest individual amount of $1,150 with a new iPhone X from Children’s Trust. She cited the organization’s important work as a motivating factor in her efforts while also crediting the generosity of family and friends.

“The letter-writing campaign is something that is such a simple way for us to reach out to our community, but it receives an amazing response from so many who feel just as strongly about child abuse prevention,” Fassler said.

“I worked as a camp counselor for many years and I, along with so many others, believe that no child should ever have to go through something like child abuse. I am so grateful that Kappa Delta has given me the opportunity to raise money for such a worthy cause, and I know that Children’s Trust will continue working to make a difference for all children in our community.”

Kappa Delta collegiate and alumnae chapters across the country have held events in the fall and the spring since 1984 to support the prevention of child abuse. The USC chapter began its partnership with Children’s Trust in 2008, and over that time period, it has raised approximately $400,000 for child abuse prevention in South Carolina.

“It’s hard to put into words what a difference these young ladies have made. They have become the largest support system for our team in the community,” Leicht said. “Consistently, year after year, they have partnered with us on multiple projects to support Children’s Trust. This single effort, the letter-writing campaign, is just enormous. It’s very exciting.” 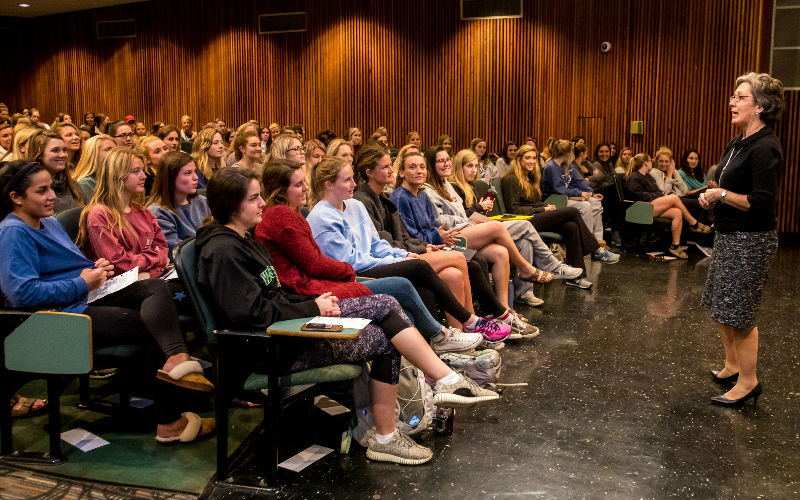