(South Strand News) – Suzi Roberts, 23, of Pawleys Island said she was “so shocked” to be crowned Miss South Carolina on June 24 that she doesn’t even remember what happened next. 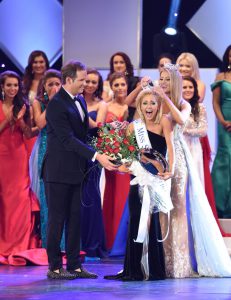 “It is a complete blank,” she said. “In that moment, you remember all the hard work and realize it finally paid off.”

Roberts has competed in the Miss South Carolina Pageant three times, this time representing Columbia. She placed in the top 10 her first year, then placed as first runner-up last year as Miss Coastal Islands.

Roberts will now compete in the Miss America Pageant in Atlantic City, New Jersey, in September.

“I don’t think it hit me that I’m going to Miss America until people started asking me questions about it,” she said. “I couldn’t be more excited because this is an opportunity I never thought I’d have, to step up to the Miss America stage.”

Roberts left Pawleys Island at age 12 to enter private ballet study in Houston, Texas. She attended the University of Texas, transferred to the University of South Carolina, cheered for the Atlanta Falcons and then pursued beauty pageants to eventually compete for the Miss South Carolina title. She is now living back in Pawleys Island and plans to attend law school at USC in the Children’s Law Program and pursue a career that goes along with her child advocacy platform.

She said her determination and drive have led to her success.

“Ever since I was a young girl, I’ve been a go-getter,” Roberts said. “Give me a task, a goal to chase after, and I’ll do everything in my power to achieve that goal. I never stop, I don’t accept limitations and I take it a step further to take the road less traveled.”

Her parents, Gary Roberts, a partner with Coldwell Banker Chicora Advantage and broker in charge of the South Strand Commercial District, and Mariah Johnson, an associate with RE/MAX Southern Shores, said they are very proud of their daughter.

“I am so proud, I can’t stop crying,” Gary Roberts said. “She is a little woman, but she’s bigger than life when she’s on stage.”

He said he doesn’t know who was crying more when the winner was announced, him or his 18-year-old son Hampton, who has also been supportive.

Gary Roberts said he was impressed with his daughter’s lyrical dance, choreographed to a remix Whitney Houston’s “Greatest Love of All” for the talent portion of the pageant.

“She was beautiful on stage and had a lot of energy,” he said. “The lyrical dance was fun with some ballet and some acrobatics.”

Johnson agreed, adding that a lot of work went into winning the pageant.

“I think sometimes people think contestants win in one night, but that is not where you win Miss South Carolina,” Johnson said. “You win with hours of service work and being dedicated to organizations that have to do with your platform.”

Johnson said by the time Roberts won Miss Columbia, she had completed more than 100 hours of service and raised almost $24,000 for the Children’s Miracle Network. She also worked with the Children’s Trust of South Carolina and the Institute for Childhood Success.

“Her goal, when she set out on this, was to be a child advocate,” Johnson said. “I think she’s achieved that.”

Both parents say competing in the Miss South Carolina Pageant has been a positive experience for their daughter and they are optimistic about her chances in the Miss America Pageant.

“I think Suzi has as much chance as any woman on the stage and she’ll give it everything she has to represent her state,” Gary Roberts said. “Whether she wins or not, she will walk away having the experience of a lifetime.”