donate
fundraise
Home / Media Coverage / Program teaches South Carolina’s moms, dads and children how to get along, even in tough times 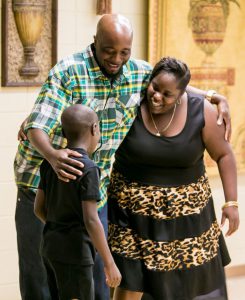 Vantwan Burkett and Yolanda Sanderlin of Columbia look at their son Jameel during their graduation from the Strengthening Families Program last year. Jeff Blake/Provided

The man was built like a fireplug, the kind of person no one would want to cross in a back alley, but Lee Porter couldn’t resist asking him what he had thought about the previous 14 weeks.

Porter was curious because this man was among about a dozen fathers who had just completed the Strengthening Families Program, one designed to improve family life for children between the ages of 6 and 11 and their parents or caretakers.And Porter was struck by his answer.”He said, ‘You know what? I’m listening more than ever before. I never really listened before. And I’m not yelling any more. I don’t have to yell to get my kid’s attention,'” Porter said. “He said this just changed his whole demeanor.”

That sort of anecdote is not uncommon and helps to explain why South Carolina has made a large commitment to the program, which has been around nationally since the 1980s but only started up here seriously around 2014.That’s when the Children’s Trust of South Carolina began to partner with the Duke Endowment and the state Department of Social Services to offer the program at four different counties across the state, including Richland, Lexington, Aiken and Greenville.

Since then, it has found local partners to serve to 23 counties, graduated more than 1,000 families and changed many more lives, according to Porter, chief program officer with the trust, a Columbia-based nonprofit that aims to reduce child abuse and neglect. The trust, which has received a $9.5 million multiyear grant from Duke, also is in talks about expanding the program to Dorchester and Horry counties. It graduated 436 families last year and hopes to graduate about 600 next year.

“We’re trying to generate enough capacity to graduate around 800 families a year,” Porter said. “That’s our goal right now. That’s more than anybody in the country is doing.” 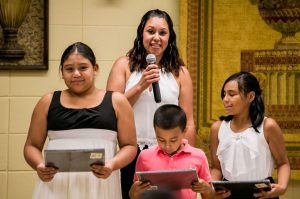 It all begins with a meal, like many family events. Participating families, usually between 8 and 14 at any given time, first break bread with each other and Strengthening Families staffers.

Between bites, they learn skills such as how to express emotion, how to show they care for each other and talk about less harsh disciplinary techniques.

The parents and children then break into separate sessions where they get more instruction about communication, social skills, listening and the like, before reconvening for 30 minutes to get their homework for the coming week.

“It’s really skills-based,” Porter said, “How to get along as a family 101.” Most families stick with the program for all 14 weeks (some areas offer more condensed seven-week summer sessions), and for those who do, their graduation is often a big, joyous event.

Graduation can look different all across the state, depending on the local partner, said Sherri Caldwell, who coordinates the Strengthening Families Program for the trust. Some don formal caps and gowns, followed by a party with a DJ and dancing.

“You can expect a lot of laughter and a lot of tears. This program is described as being life-changing for a lot of families,” she said. “For many families involved in SFP, this may be the first time they graduated from anything.” 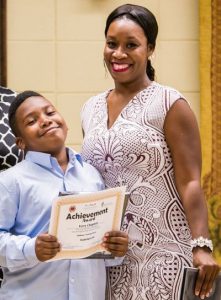 Renee Chapman and her son, Terry, celebrate their graduation from a Strengthening Families Program in Columbia last year. Jeff Blake/Provided

Caldwell and others track 15 different ways the program helps, such as child aggression and depression and family organization and resilience.Of those 15 measures, the trust found all had significant positive changes, including seven deemed to have had a large effect, according to an October 2016 evaluation report by a Maryland consultant.

Porter said the trust has begun to brainstorm about ways to maintain and expand the program across South Carolina in coming years, including potential sources of revenue.

The trust also announced last week that its number of partners has risen from 15 to 20, including these new ones: EdVenture Children’s Museum in Columbia, the Pee Dee Community Action Partnership in Marion County, Red Bank Elementary in Lexington County, the YMCA of Columbia and Lee County First Steps.

Its Charleston-area partner has been the nonprofit FamilyCorps in North Charleston.

A big part of the program’s success simply may lie with families, especially in rural areas, who connect with others like themselves.

“More often than not, they will say to us at graduation, ‘Can we keep going?’” Porter said. “It really does change the trajectory for some of these families. It’s not just a feel-good thing.”