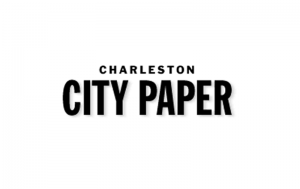 (Charleston City Paper) – An increase in the number of insured children and a decrease in the amount of teen births has moved South Carolina up one spot in the Annie E. Casey Foundation’s annual Kids Count report.

The Palmetto State now ranks 38 in the nation in overall child well-being, according to the 2018 report released Wednesday. That’s up one position from last year and the best the state has fared in the rankings which have been published annually since 1990.

The number of kids in S.C. without health insurance stood at 44,000 in 2016, the most recent year the report examines. That accounts for four percent of the state’s child population and shows a small drop from five percent in the 2015 report. The figures show a continued decrease in the number of uninsured children since the 2010 Census when 10 percent of children were without insurance.

The number of children living in a single parent home declined by just one percent to 41 percent in 2016.

“Much of this success is because South Carolina parents, community leaders, and state and federal legislators have long advocated for the well-being of kids and implemented programs, like children’s health insurance, to ensure that children have opportunities to thrive,” said Sue Williams, CEO of Children’s Trust, the state’s Kids Count grantee. 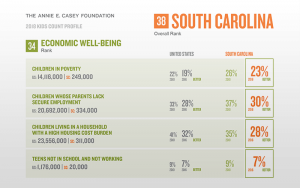 The Children’s Trust warns that an accurate 2020 census is necessary to keep the billions of dollars in federal aid South Carolina received in formula-based funding for things like school lunches, the Children’s Health Insurance Program (CHIP), and other state and local programs.

“The 2010 U.S. Census failed to count almost 1 million children younger than age 5,” the report states. “The decennial census also historically undercounts children of color as well as kids in low-income and immigrant families.”

“If South Carolina is to continue to rise in the ranks, we must continue to invest in communities and support families,” Williams said. “An accurate census count will be an important step to securing that future.”

There were 26,000 children under five who lived in hard-to-count census tracts from 2012-2016, according to the Census Bureau, which is currently operating without a permanent director after the last one resigned in May, according to The Huffington Post.

“In the 2010 census, the undercount rate for Latino children under age 5 was 7.5 percent; the rate for black children (including kids listed on the census as black and another race) was 6.3 percent,” the report says. “In contrast, the rate for children who are not black or Latino was 2.7 percent.”

The Trump administration’s decision to include a citizenship question in the next count has also driven debate about the accuracy of the 2020 census.

An inaccurate census would not only affect the federal dollars allotted to states, but it could also impact the number of representatives each state is apportioned in the U.S. House. The 10-year redistricting process that follows has also become highly political as parties compete to increase their representation in state legislatures.

Census Bureau researchers “noticed a recent increase in respondents spontaneously expressing concerns about confidentiality” in pretesting studies, according to a 2017 memo.