As the Strengthening Families Program grows in South Carolina, so does the outreach to get more men involved in the delivery of the sessions. This strategic push is one way to reach young boys in the program and also get more fathers involved as participants with their families. Neil White, who tells the stories of Children’s Trust, covered a recent SFP training session that included nine men among the 30 attendees. 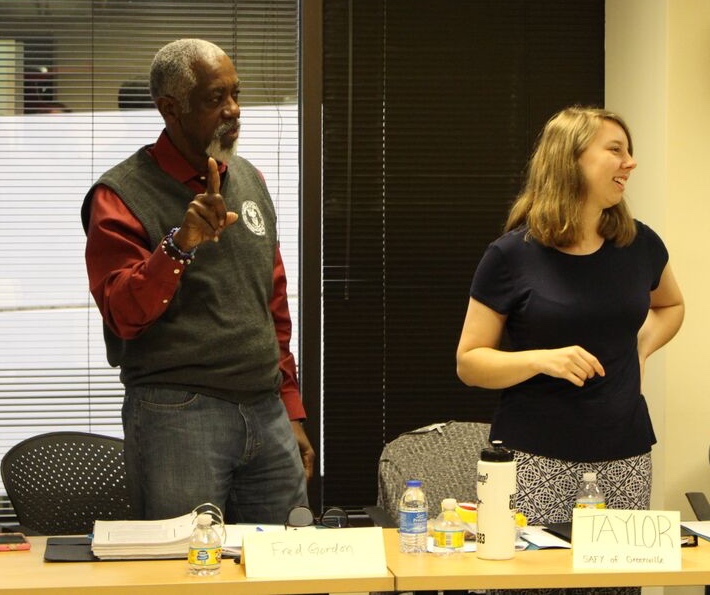 The Hon. Fred Gordon, Jr., is used to receiving respect in his Sumter County courtroom as a magistrate judge.

But Gordon has found a new audience – young boys ages 6 to 11 at Crosswell Drive Elementary School – that truly embraces his words of wisdom. That’s where he serves as a group leader for the Strengthening Families Program (SFP) administered by Children’s Trust through Lee County First Steps.

“It’s almost like when I talk, they really, really listen,” Gordon said. “And that makes me feel good because I’m saying something that they maybe can relate to or maybe want to relate to. … I’m not here to be a dad, but I’m here to give as much guidance as I can, and make sure I’m available to them if they need to talk to me. I’ll do whatever I can for them. And they appreciate that.”

Gordon attended a recent SFP training for 30 new group leaders held at Children’s Trust, where local partners implementing the program across the state gathered. In a positive development, nine of the 30 participants were men.

Jeanie Ahearn Greene, executive director of Maryland-based Ahearn Greene Associates, the consulting firm that serves as the authorized source for fidelity evaluation of SFP, typically sees only a couple of men – sometimes none – in a training class.

That has led to a concentrated effort to attract more men into the program as facilitators, both as a way of finding voices that connect with the boys in the classes as well as get more fathers involved in going through the 14-session program with their families. 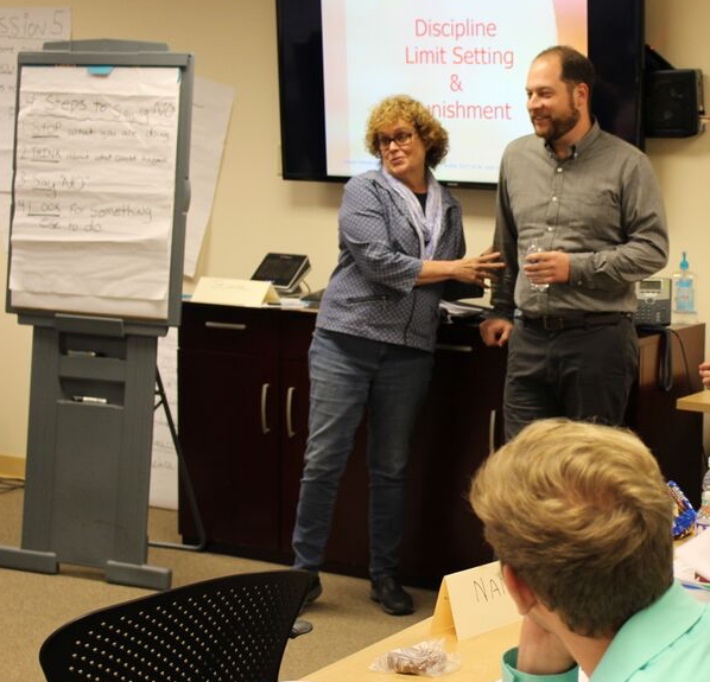 “Many agencies say, ‘Well we don’t have any men on staff.’ So what I think is that we need to take kind of an affirmative action stance to have gender representation in the human services,” Ahearn Greene said. “So this is a really good way to do it because you can get men involved in human services by giving them some jobs in the evening or some short contract jobs.”

SFP is an evidence-based program that is designed to help families, primarily those with elementary-school children, develop positive discipline practices, stay resilient in tough times, reduce conflict, improve parenting skills, and assist children with social skills, relationships, and school performance. All of these factors play an important role in keeping families strong while protecting against potential neglect or abuse.

Gordon took on his role in large part because his wife, Bessie Sanders-Gordon, is the program manager for Lee County First Steps at the Sumter County sites. It hasn’t taken long for him to see the larger impact the program is having on the families.

“I’ve seen these children go from darkness to daylight in terms of how they learn to communicate with their parents, and some of the results of that communication,” Gordon said. “And just even some of the children’s behavior, I’ve seen a change. Most of them that I see there, they’ve been brought there by a mother, a single parent, or a grandmother, so they need some kind of male presence in their life. I think that’s one thing that I feel like I can provide for them in a non-threatening manner.”

Dominic Benjamin works as a group leader for Lighthouse Ministries, which is delivering the program at John Calvin Presbyterian Church in Florence. A youth pastor at the church, Benjamin heard about SFP from his cousin and decided to explore the opportunity to get involved. As someone whose father wasn’t involved in his life as much as he wanted, he understood the positive influence he could provide in the lives of the boys.

“I wanted to give back to the community because I felt like, if I could be the person or the agent of change for another male person, why not take the opportunity? Once that opportunity became available, I hopped right on it,” Benjamin said. “Children these days actually need a positive male role figure in their lives.” 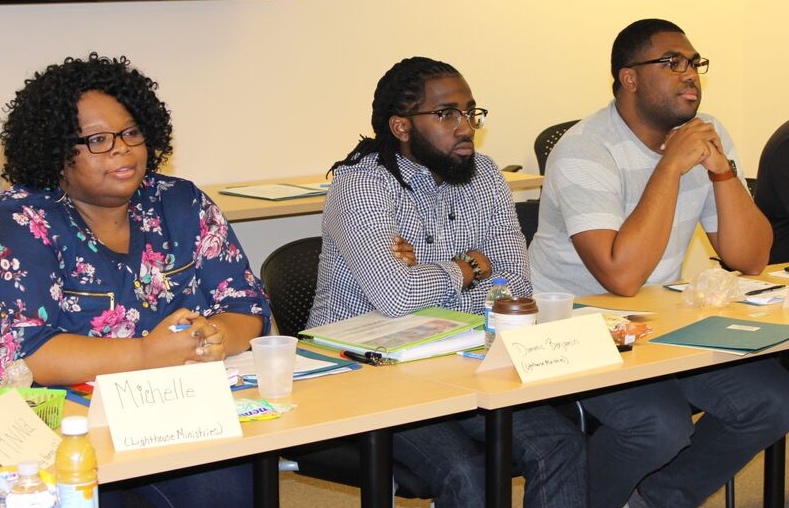 As a youth pastor, Benjamin has seen his share of boys and teens without a father in their lives and tried to fill that void. He has heard the words of appreciation from their mothers for being willing to make a difference in the lives of their sons. He views SFP as another opportunity to make the families in his community stronger.

Sherri Caldwell, the SFP manager for Children’s Trust, looked at the number of males in the training session as a good sign for the continuing growth and impact of the program, which now reaches half of South Carolina’s 46 counties through the work of 20 local partners.

Moses Wallace III originally came to SFP in the spring as a participant in the sessions run by Westview Behavioral Health in Newberry County. He saw the program’s benefits and knew that he wanted to be involved as a group leader moving forward. He had noticed how some of the young boys didn’t always pay attention like they should.

The first time he stepped in to help guide a class this fall, he immediately got a few of the boys to take notice. 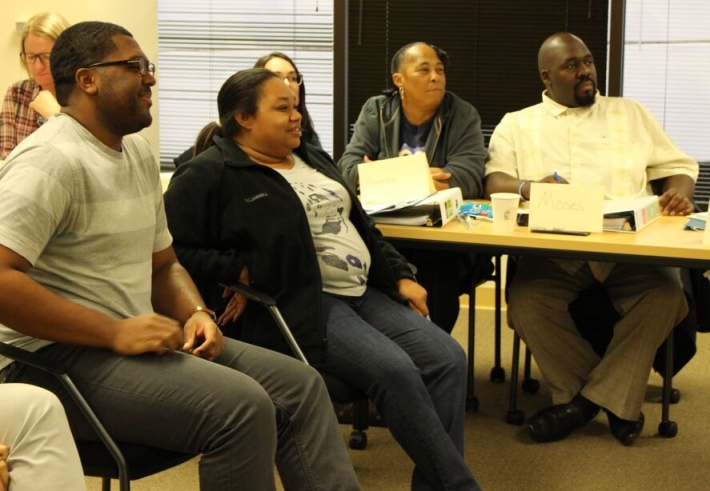 Moses Wallace (right) wanted to be a group leader after going through SFP as a participant.

The female group leader in that class quickly saw a behavioral difference, and Wallace knew he had found a home in the program. In making her site visits, Ahearn Greene has seen the positive effect as well. That has propelled the effort to recruit more male group leaders, which she calls a quality improvement issue.

The success of SFP in South Carolina is directly related to expansion efforts that are a result of $9.5 million awarded to Children’s Trust over three years (2016-18) by The Duke Endowment and the S.C. Department of Social Services. As the program expands, Children’s Trust and Ahearn Greene Associates are always looking for ways to create better outcomes for more families.

Men like Gordon are part of that initiative. He would much rather see these boys in SFP rather than standing before him as a judge when they’re young adults.

“Sometimes in my job, I see them on the other side, you know, when they’ve gotten into a little trouble, and they’ve got to figure out how to get out of trouble,” Gordon said. “Because you don’t want them to get caught up in that vicious cycle of getting into trouble, in and out of incarceration. So whatever we can do, the better they’ll be, absolutely. And that’s what I try to impress on them.”