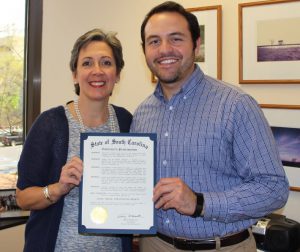 April is the nationally designated month to acknowledge the importance of communities working together to prevent child abuse and neglect. As the home to Prevent Child Abuse S.C., Children’s Trust, along with 53 local prevention partners, will focus on strategies to protect children, strengthen families, and raise awareness to stop child abuse and neglect from occurring.Children’s Trust CEO Sue Williams called the partnership an important element of child abuse prevention because local leaders understand what works best in their communities.

“Their commitment sends a signal that all of us are united as strong, passionate, statewide advocates for the goal of preventing child abuse and neglect,” Williams said.“Children’s Trust seeks to collaborate at the state and local levels to deliver effective prevention programs because no single public agency or community organization can do this work alone.”

The proclamation cites the importance of prevention programs in communities across South Carolina that give families the knowledge and resources to learn, grow and thrive while providing a safe, caring environment for children.McMaster encourages all South Carolinians to work together to protect the safety and well-being of children in the Palmetto State.

The sixth annual Children’s Advocacy Day was held April 4 on the second floor at the State House to recognize Child Abuse Prevention Month.

The S.C. Network of Children’s Advocacy Centers, the Department of Social Services, the Attorney General’s office, and child advocates Children’s Trust and Silent Tears, partnered for a press conference to focus on the need for legislators, agencies and organizations to make a concerted effort to combat child abuse and neglect through prevention, treatment and prosecution.