The Child Passenger Safety Summit offers training and certification for first responders and community volunteers while honoring the best in the field. Neil White tells the story of the event. 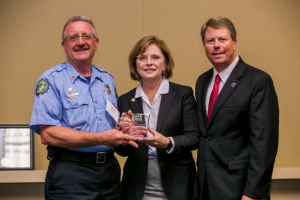 Jones receives award for Documented Save of the Year

Jones receives award for Documented Save of the Year

Easley firefighter Jack Jones strode to the front of the room at the Columbia Metropolitan Convention Center with the happiest of expressions on his face, followed by an equally delighted Betty Ford of Beaufort. The duo claimed the day’s top awards — Jones for the Documented Save of the Year and Ford for Child Passenger Safety Technician or Instructor of the Year — to cap the 2015 Child Passenger Safety Summit held Sept. 18.

“Our summit provided close to 200 child passenger safety technicians the ability to maintain their national certification by receiving the latest car seat information directly from manufacturers and other national speakers,” said Safe Kids South Carolina manager Heidi Aakjer, who organized the event for Children’s Trust in conjunction with the organization’s Prevention Conference. 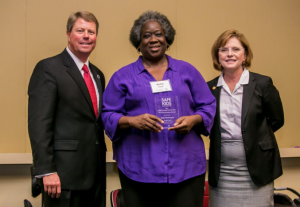 The Jones Bowen Awards ceremony, named for the late Safe Kids Aiken coordinator, are given in honor of his dedication for child passenger safety and injury prevention. Jack Jones installed a car seat that helped save a child’s life two months later in a rollover accident. Ford, a technician for more than 10 years, has gone above and beyond her normal duties to accommodate families in car seat installations and inspections.

“The need for more local heroes to assist in saving children’s lives is greater than ever,” Aakjer said.

Aakjer presided over the ceremony with Jeff Allen, a Children’s Trust board member and the Chief Fire Marshall for the Irmo Fire District. Joining them were state Sen. Katrina Shealy, R-Lexington, and state Rep. Chip Huggins, R-Lexington. They saluted the more than 900 technicians who volunteer their time for training and certification in order to help keep children across the state safe from devastating injuries.

“It takes a lot for someone to use their own personal time to do that, and it means a lot to us as private individuals but also as legislators,” Shealy said. “To see the commitment they have, we really appreciate it. It was an honor for me to get to be a part of this and share in their recognition.”

“Safety of our kids is first and foremost. It has the highest importance in our state,” Huggins said. “What Children’s Trust does along with everyone here is invaluable. It helps us make it easier to pass legislation that will save kids’ lives.”

Allen was pleased the legislators took the time to engage in this important issue.

“They were more than gracious to show up and give their support,” Allen said. “Obviously, we’re hoping they spread the word when they go back to the State House.”

There are almost 600,000 children in South Carolina under the age of 10, the majority of whom should be in child safety seats or booster seats. According to DHEC, 90 percent of car seats in South Carolina are installed incorrectly, which makes the need for additional certified technicians even more significant.

Recruiting more technicians remains a key for Safe Kids South Carolina and Children’s Trust, which provide training support for the programs. They could earn five of the six required continuing education units (CEUs) to maintain their certification at the summit.  Allen also called the manufacturing experts who share their wealth of information in the training sessions essential to the summit’s success.

He believes the momentum coming out of the summit is crucial for spreading word of the good work done by CPS technicians.

“They want to go out and do more and do better and maybe get some other people involved,” Allen said. ” How long it takes for that to wear off is a good question, but the summit helps to recharge the battery and put everybody in a positive mood again.”