Children’s Trust board member Elizabeth Gressette was presented the Yezbak Award for her service and commitment to the organization at the Sept. 26 quarterly meeting of the board of directors.

The award, which is named for former board chair David Yezbak, highlighted Gressette’s longstanding dedication to the prevention of child abuse and neglect. 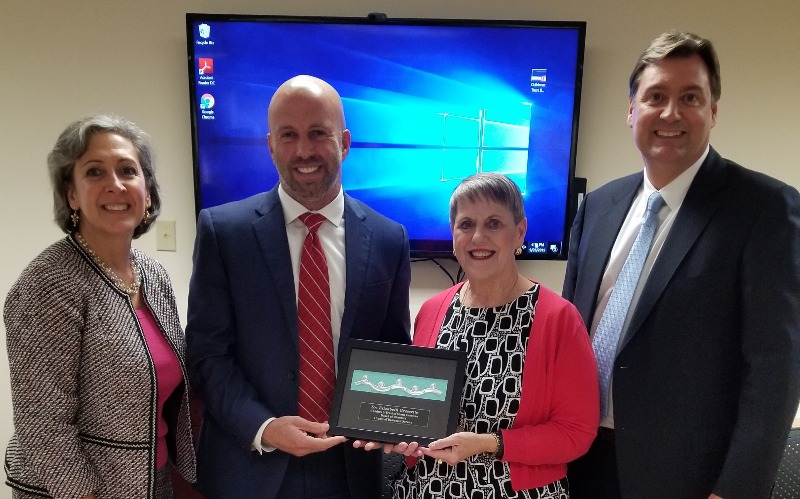 “I am honored and humbled to receive the Yezbak Award,” Gressette said. “My service on the board spanned almost 12 years so I was able to see the organization grow over the years. Children’s Trust’s focus on prevention gives families the resources to better deal with challenges they face. I was proud to be a small part of that.”

Her distinguished career as an educator led her to Children’s Trust. After working as a teacher for a number of years, Gressette received her Ph.D. in education and became the longtime executive director of the Palmetto State Teachers Association. A member of various civic organizations, she has received numerous honors and awards throughout her career, including the Order of the Palmetto in 2005.

Board chair Stephen Leicht, along with Yezbak and Children’s Trust CEO Sue Williams, presented the award to Gressette. Leicht saluted her devotion to supporting children in ways that lead to happier, healthier lives, stronger families, and thriving communities.

“Dr. Elizabeth Gressette has dedicated a lifetime to the betterment of children in our community,” Leicht said. “She served for eight years on the Children’s Trust board of directors, and longer as a volunteer, as she worked on many committees and held leadership positions. Beyond a dedicated spokesperson for children, she is also a passionate advocate for education and prevention programs for parents and families across our great state.”

Williams, who has worked with Gressette over this time period, echoed those sentiments wholeheartedly.

“Elizabeth’s tenure truly is about leadership,” Williams said. “She did so much more than simply show up and volunteer. She was willing to speak about Children’s Trust and its mission wherever she went, and she was especially committed to bettering the lives of children through her experiences as a teacher and community leader.”

Former board member Jane Pulling won the initial Yezbak Award a year ago.