(Midlands Anchor) – Suzi Roberts knows what it feels like to have a dream come true, and hopes to share that feeling with children who need someone to stand up for them. Roberts, the reigning Miss Columbia, won the Miss South Carolina crown Saturday night, and plans to use her new title to be that someone. 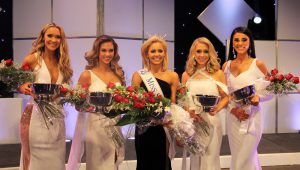 Roberts, like every Miss South Carolina competitor, chose a platform, a cause important to her to support, and for Roberts, the choice was an easy one. She made #SuziStands4Kids her mission long before she became Miss Columbia.

Roberts works closely with Children’s Trust of South Carolinaand partners with them in Child Abuse Prevention Month. She has also served Richland County as a Court Appointed Special Advocate for Children and served a public relations intern for Justice 360, a legal services non-profit organization working to reform policies and practices in capital proceedings. She is a spokesperson for the Children’s Miracle Network Hospitals through partnership with the Miss America Organization. She also works alongside other advocates to bring children’s issues to the attention of lawmakers.

Roberts is a professionally trained dancer, a former member of the Carolina Girls dance team at the University of South Carolina and former cheerleader for the Atlanta Falcons. She is also a USC graduate and has been accepted at USC School of Law, though she will now put law school on hold while she serves as Miss South Carolina.

“I’m just excited for what this means for the children of South Carolina. I’m excited to serve them and to transform their lives with this title and I just hope that you guys will support me along the way,” Roberts said. “I think the more children you get close to, the more families and communities you get proximate with, the more you learn how many issues there actually are.”

Miss Midlands, Morgan Romano, made the top 10 as the judges trimmed the field from an original group of 45.

Roberts danced to Whitney Houston’s “Greatest Love of All” in the talent competition, a song with words to fit her mission, which, as she told Midlands Anchor earlier this year, “started with one particular child. The system failed to protect her. Because her family looked normal on the outside, nobody got involved. Seeing the effects of child abuse in her life… I just couldn’t stand to see another child go through that.”

With a larger audience looking to her as Miss South Carolina, Roberts said the mission will only grow. “I think the more children you get close to, the more families and communities you get proximate with, the more you learn how many issues there actually are,” she said. “The work will never stop. I hope to reach every single corner of child advocacy as Miss South Carolina.”

More photos and video from the Miss South Carolina competition are available on the Midlands Anchor Facebook page.