COLUMBIA – After achieving its highest ranking in 2018 in the most comprehensive nationwide survey of child well-being, South Carolina slipped one spot to 39th. The 30th edition of the KIDS COUNT® Data Book (PDF), released by the Annie E. Casey Foundation, outlines that a lack of significant improvements in poverty and education have hindered South Carolina’s progress to improving child well-being.

“This year’s ranking reinforces that there is still a lot of work to do for children and families,” Children’s Trust CEO Sue Williams said. “Meaningful, efficient investments in programs and services are critical for family stability and for building opportunities that break generational cycles of poverty.”

Children’s Trust will host a panel discussion on the state of children in South Carolina with lawmakers from the Joint Citizens and Legislative Committee on Children. Members of the news media are invited to attend: Monday, June 17, 10:30 a.m. to noon, Richland Library Main, 1431 Assembly St. 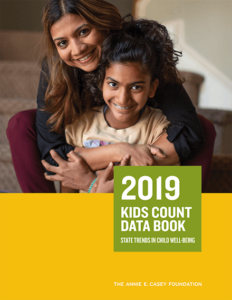 Nearly a quarter of children in South Carolina live in poverty and, significantly, 12 percent live in high-poverty communities, according to the Data Book. Closely related education measures are also troubling. More than 70 percent of fourth-graders are not meeting reading standards, and more than 70 percent of eighth-graders are not meeting math standards. More than half of the state’s 3- and 4-year-old children are not in preschool, kindergarten or nursery school.

“If we want to have a qualified workforce for new industry and a vibrant, healthy economy in the future, the time is now for us to invest in children, especially if we want future families to have the skills and means to lift themselves out of poverty,” Williams said.

Southern neighbors are outperforming South Carolina:  North Carolina at 33rd; Tennessee at 36th and Georgia at 38th. Specific indicators underscore how South Carolina is falling behind other states: 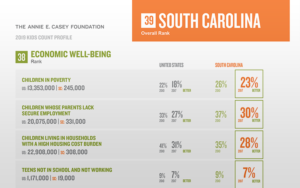 Recognizing that meaningful change takes time, substantial progress has occurred in access to child health care coverage and teen pregnancy rates. Both areas have improved almost 50 percent over the last 10 years. Additionally, parents are more likely to be employed full-time and have enough income to cover basic needs such as housing, an area that has shown a 20 percent improvement over the last 10 years.

Seeking solutions, the South Carolina Child Well-Being Coalition has been convening to discuss specific strategies and initiatives that will mitigate poverty and improve child well-being. Members of the group include local and state agencies, as well as community leaders and organizations.

Another important intermediate strategy is to ensure an accurate count in the 2020 U.S. Census. State and local programs, such as education, school lunches and children’s health insurance, rely upon formula funding based on population numbers set by the census. South Carolina could lose billions of dollars if South Carolina children are not accurately counted. Children’s Trust also relies upon good data to make informed decisions on program investments.

The 2019 KIDS COUNT Data Book is the 30th edition of an annual data study that is based on U.S. Census and other publicly available data, representing all 50 states, the District of Columbia and Puerto Rico.

About Children’s Trust of South Carolina

About the Annie E. Casey Foundation

The Annie E. Casey Foundation creates a brighter future for the nation’s children by developing solutions to strengthen families, build paths to economic opportunity and transform struggling communities into safer and healthier places to live, work and grow.